Home » Traveller Information » Getting from Lisbon to the Algarve by Bus, Train, Car and Plane

So you visited Lisbon, and now the warm weather got you thinking about the Algarve’s beaches.

Facing the Atlantic to the west and south, the Algarve coastline is approximately 150km (93mi) long. The region offers the best climate in Portugal and beaches for every type of traveller.

Beaches to the west, between Sagres, Lagos and Portimão, including Meia Praia and Alvor, are generally windy, and the sea temperature usually gives you an invigorating feeling due to the upwelling during the summer months. This region of the Algarve is sometimes called the windward coast (or barlavento). 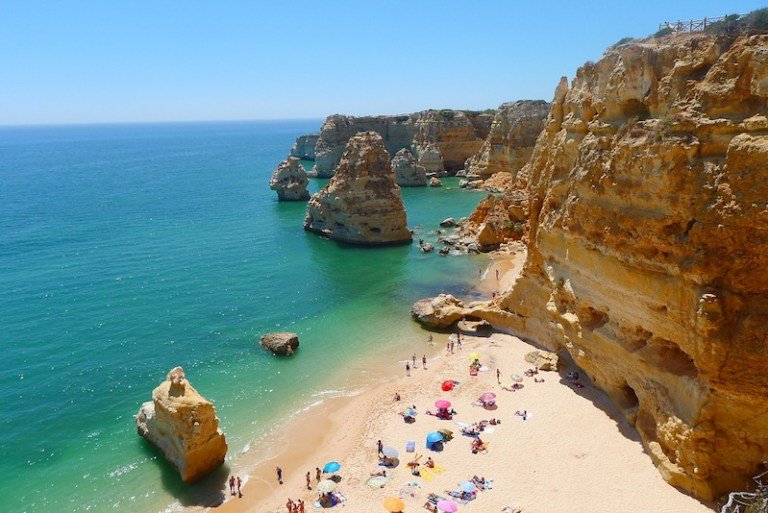 With warmer waters, the middle of the Algarve is the busiest area, especially around Lagoa, Albufeira, Vilamoura and Quarteira. Praia da Marinha, Armação de Pêra and Praia da Oura are some of the most popular beaches of the central coast.

To the east, you’ll find Ria Formosa Natural Park, the town of Tavira, the extensive stretch of sand known as Manta Rota, also very popular among Portuguese families, as well as the town of Vila Real de Santo António on the Spanish border. This region is known as the leeward coast (sotavento).

The Algarve is about 270 kilometres / 168 miles south of Lisbon. Your budget, the amount of time you want to spend, and the beaches you want to go to, will determine which transport option is the best one for you.

There are regular buses throughout the day between Lisbon and several resort towns in the Algarve, namely Albufeira, Alvor, Armação de Pêra, Faro, Lagos and Tavira. Depending on your destination, the trip will take between three and four hours.

The service is carried out by Rede Expressos / Renex. In Lisbon, catch the bus either at Sete Rios Bus Terminal (metro’s blue line) or at Gare do Oriente in Parque das Nações (metro’s red line). Tickets cost from €19 one way, and all trips can be booked on Rede Expressos’ website up to 30 days in advance.

There are two types of trains that go from Lisbon to the Algarve. The fast train, called Alfa Pendular (AP), connects Lisbon and Faro twice a day, stopping in Albufeira and Loulé, and the journey takes three hours. The Intercidades makes the same route three times a day, and takes three hours and 30 minutes.

In Lisbon, trains leave from Gare do Oriente in Parque das Nações. Tickets start at €23 one way, and all trips can be booked on CP’s website up to 60 days in advance.

Driving is the most flexible option to explore the Algarve, or to make stops along the way. From Lisbon, drive south on the 25 April Bridge. When faced with heavy traffic, Vasco da Gama Bridge might be an option (though slightly longer) to drive south from Lisbon.

Either way, the journey from Lisbon to the Algarve takes about two hours and 40 minutes on the A2 motorway, connecting to the A22 that crosses the Algarve.

Read our page on Where to Hire a Car in Lisbon for information on car rental companies that you can compare prices from, and things to know when hiring a car in Portugal, namely why you should rent a Via Verde transponder from your car rental company.

Flights from Lisbon to Faro

You can take a flight to Faro but with return fares at €100 or more, it will cost you many times the bus or train ticket price. Flights between Lisbon and Faro are operated by TAP and take 45 minutes. But once you add the time to get to and from the airport, and at least 30 minutes before departure at the boarding gate, the time difference between travel options will end up being less significant.