Mercado da Ribeira has become one of the liveliest culinary hotspots in Lisbon since it was converted into a food court by Time Out Lisbon in 2014.

There are more than 30 restaurants and bars at Time Out Market Lisboa, some overseen by Michelin-starred Portuguese chefs.

A huge food market in Lisbon 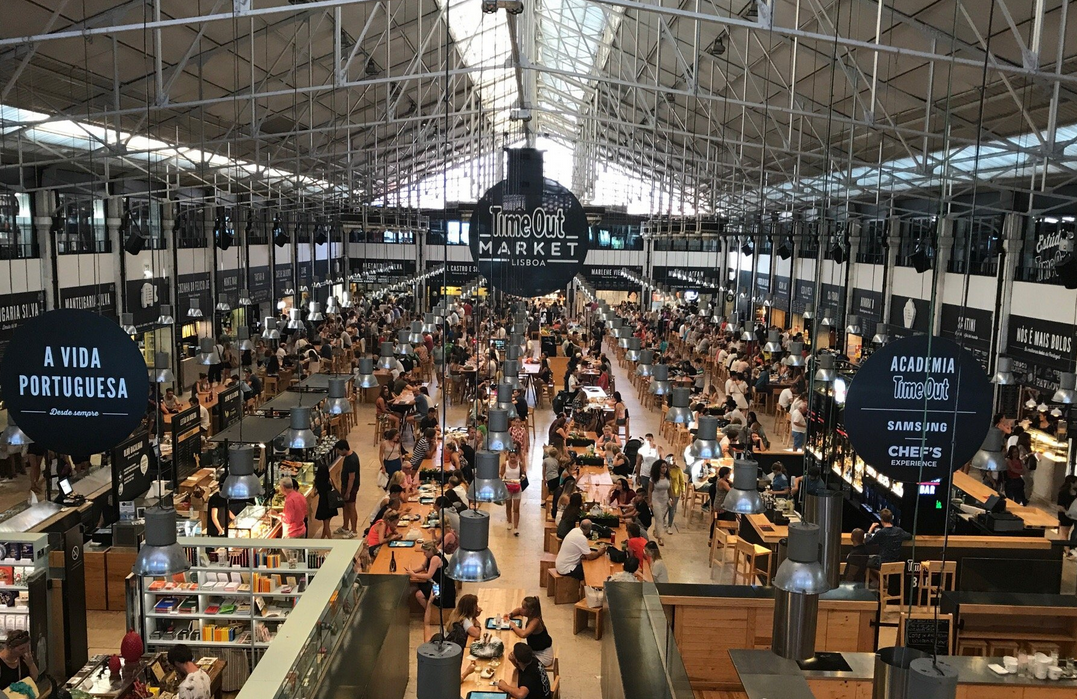 Food stalls and communal tables at Time Out Market Lisboa

All the stalls are outstanding, but you could begin with fried baby squid at Marisqueira Azul, follow it up with the roasted farinheira (smoked pork sausage) by chef Alexandre Silva. You could also try some petiscos (Portuguese-style tapas) from Northern Portugal by chef Miguel Castro e Silva. These include francesinha, a mega-sandwich that goes into the oven and is served with a sauce poured over it.

For vegetarians and vegans, the selection at Time Out Market might not be as exciting. Typical Portuguese cuisine is meat- and fish-heavy. However, at the Asian Lab you can order vegan curries and pad thai. At Pizza a Pezzi, you can get vegetarian slices, though not vegan (as they all have cheese). And you won’t be disappointed with a slice of cake for dessert at Nós É Mais Bolos.

Mercado da Ribeira is located near Cais do Sodré. The food court is open daily for lunch and dinner, from 10am to midnight (Friday and Saturday till 2am). The traditional market is open from Monday to Saturday from 6am to 2pm.

The Time Out Market Lisbon can get very busy at lunchtime and on weekends. You may have to wait on line to get a table, and it’ll probably take longer than usual to be served.
Restaurants
Share. Twitter Facebook Pinterest LinkedIn Tumblr Email
Previous ArticleWhere to hire a car in Lisbon
Next Article Direct Flights to Portugal Starting at USD 260