If you’re looking for late-summer activities, here is a cultural event not to be missed.

Whether you’re into fado, jazz, magic, theatre or dance, Com’Out Lisbon has it all for free until the end of September.

Most are outdoor events in squares and gardens. Find out how you can fill up your Lisbon itinerary in late August and September. 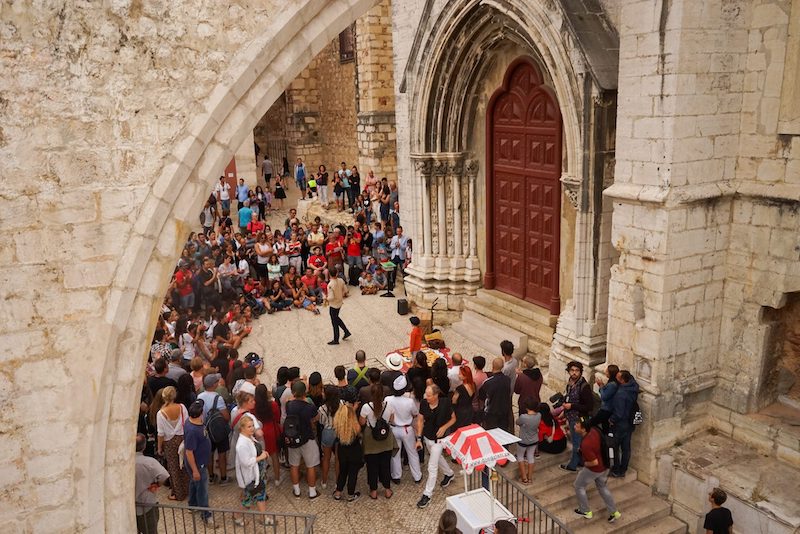 The International Street Magic Festival of Lisbon brings magicians to the city. 15 talented international street magicians will baffle and entertain with 174 shows in 12 different locations during six days. See dates, times and locations in our page about Lisboa Mágica: Street Magic Shows in Lisbon.

Four fadistas take the music of Portugal to Lisbon’s gardens and parks in four free open-air concerts, always at 9.30pm.

5 September: Jardim do Torel is the garden where the fado singer Maria Ana Bobone will perform her latest Fado & Piano, recovering a 19th-century forgotten tradition whereby fado was accompanied by piano, rather than Portuguese and acoustic guitars.

12 September: Jardim Vasco da Gama in Belém will be the stage where Duarte, author, composer and performer (singer and guitar) will present his latest album Só a cantar.

19 September: Helder Moutinho will sing fado in Jardim da Quinta das Conchas, Lumiar. Fado which comes from the Latin “fatum”, meaning destiny, is Written in Destiny (or Escrito no Destino, the name of his latest work).

26 September: Cristina Branco is a innovative fadista within the conservative world of fado. She will be performing in Parque dos Moinhos de Santana, Ajuda.

CineCidade, or CineCity, will be screening four classic American adventure movies in Lisbon Zoo. The movies will begin around 9pm, with free admission.

6 September: Up, Pete Docter and Bob Petersen (the animated film is dubbed in Portuguese, unlike the remaining three movies with Portuguese subtitles)

Free jazz concerts will be performed in the garden of the Museum of Lisbon by students from Luiz Villas-Boas Jazz School as well as foreign jazz students.

During four days, Lisbon’s Estufa Fria greenhouse will reflect on “the impact of migrations caused by the effervescent human activity”. The greenhouse is a controlled environment of plants particularly well suited for acoustic installations. Free admission.

Amor no Vale (Love in the Valley)

Amor no Vale will be a free concert by the Gulbenkian Orchestra, and a unique opportunity to enjoy classical music in an outdoor venue. Nuno Coelho will be conducting a universally popular collection of operatic arias by Mozart, Verdi and Tchaikovsky, among other notable composers.

Live acrobatic performances, theatre and music can be expected during four days in Lisbon’s squares. Circus artists, jugglers, acrobats, clowns will be found performing during the afternoon.

Dançar a Cidade (Dancing the City)

There are four Sunday afternoons in September to go out dancing with free open dance classes to suit all tastes, always at 6pm.