Wondering when you should visit Lisbon? Get help planning your trip with these monthly guides, which offer information about weather and events in Lisbon throughout the year.

A monthly breakdown will get you an idea of what to expect from the weather throughout the year. The month-by-month guides feature additional information about the weather, what to pack, and things to do in Lisbon each month.

Lisbon is a year-round destination, with a Mediterranean climate and mild temperatures. The hottest month of the year is usually August when the average high is 29ºC / 84ºF, but unexpected heat waves can make high temperatures go up to 35°C / 95ºF and more for a few days (normally no longer than a week). The coldest month is January when the average high drops to 15ºC / 59ºF.

November and December have a rainy reputation, but rainfall can vary from year to year. Some downpours are common in late September or early October, but a week without sun is pretty rare in Lisbon. There’s never snow on the ground.

The off and shoulder seasons, which in Lisbon is November through March (off season), and April through May and September through October (shoulder seasons), are the best to avoid overcrowding. Some years, summer temperatures can start as early as late May, while in other years the beach season can extend to mid or late October.

Average Temperatures and Rainfall by Month 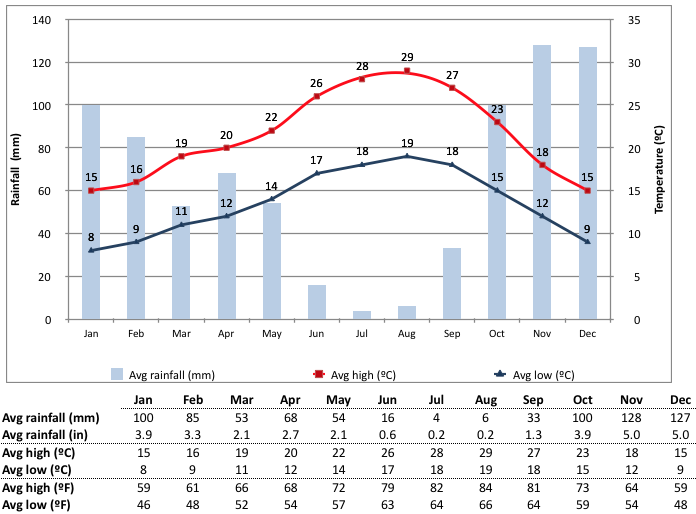