The historic yellow tram runs again on route 24, having been suspended for 23 years. This is one tram ride you don’t want to miss while in Lisbon.

Reopened on 24 April 2018, route 24E (where “E” stands for “Eléctrico”, the Portuguese word for tram) currently runs from Largo do Camões in Chiado to Campolide (see stops and map below).

It goes through Ascensor da Glória (one of Lisbon’s three funiculars), crossing Príncipe Real along Rua da Escola Politécnica, towards Largo do Rato. Then, it climbs Rua das Amoreiras and glimpses Amoreiras Shopping Center across the street, before reaching its final stop in Campolide.

The tram ride takes about 20 minutes each way (assuming no traffic delays). Use your Viva Viagem card, or buy the ticket from the driver (onboard fares are more expensive). 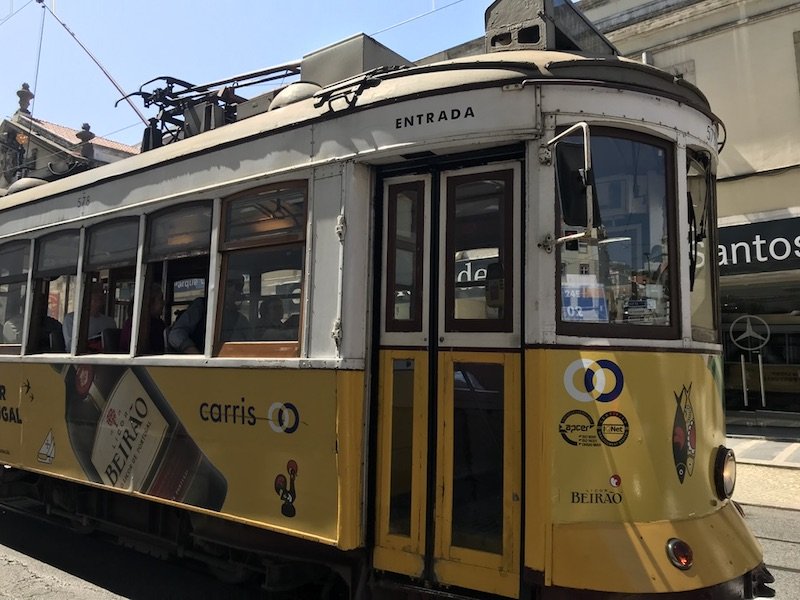 The history of trams in Lisbon begins in 1900, linked to the electricity power supply. The tram network expanded till the 1960s. In the years that followed, tram routes were gradually phased out, being replaced by either the metro or alternative bus routes. The main reason for this was actually that many cars left double-parked blocked the tracks (a problem that still happens today though). Travelling by tram could then be a real nightmare.

Route 24 began operation in 1905 and was suspended in 1995. By that time, only five notable tram routes, including the popular 28, remained in operation. However, now the Lisbon municipality wants less cars in the city centre. As a result, route 24 is part of a more ambitious transport plan for the city that includes other routes, more trams (historic as well as modern), and a bike hire system.