Jerónimos Monastery is Belém’s ex-libris, a Unesco-listed monastery commissioned by King Dom Manuel I, the Portuguese monarch at the time of Vasco da Gama’s pioneering sea voyage to India in 1498.

Construction began in 1501 and progressed for nearly one century. The Discoveries financed the Monastery construction via the “pepper tax” revenue and a 5 percent levy on trade with Africa and the Orient. 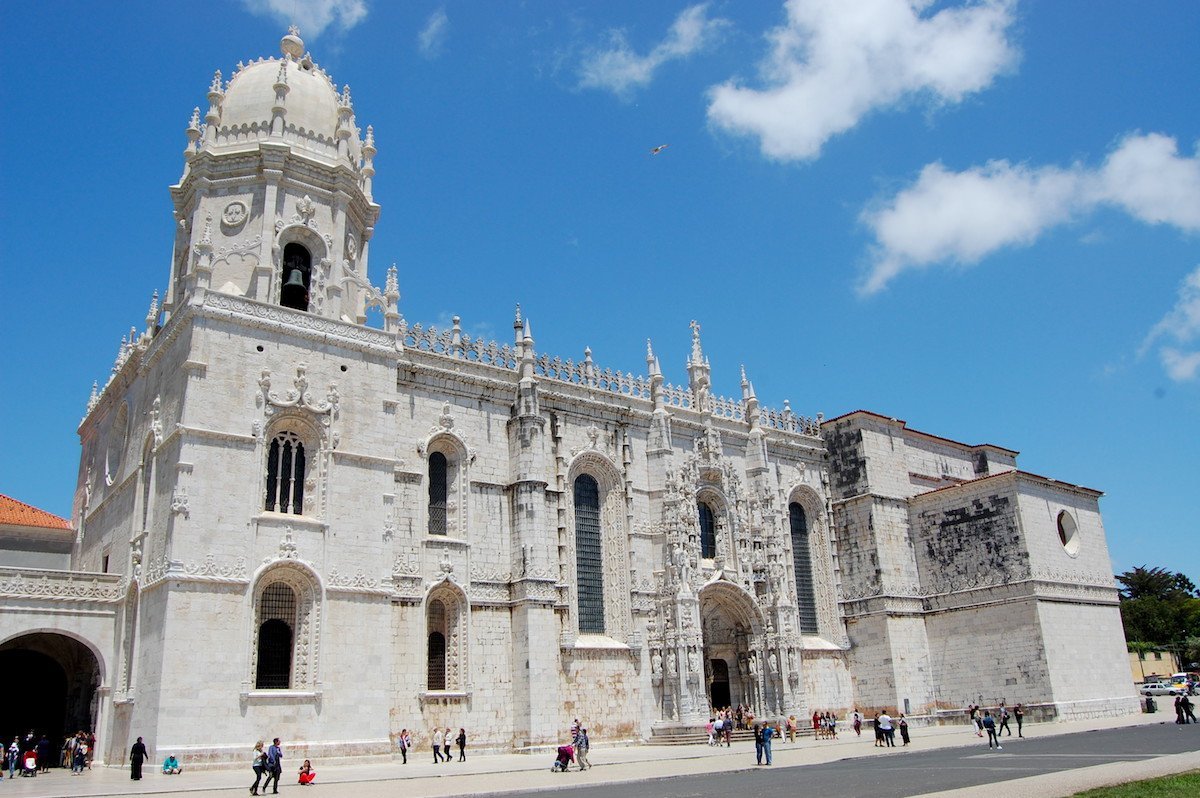 Given the grandeur of the Monastery, several architects oversaw the project throughout the sixteenth century, namely Diogo de Botaica, the architect responsible for Belém Tower and one of the key figures of what would become known as the Manueline architectural style, and João de Castilho, who took over the work around 1517.

The monks of the Order of Saint Jerome occupied the monastery till the dissolution of the monasteries in the nineteenth century. The Mosteiro was then secularised and handed over to the charitable institution, Real Casa Pia de Lisboa, that occupied the building until 1940 with a school and an orphanage. The monastery church became the parish church of the Belém district. A part of its valuable contents was lost in the process.

In the twentieth century, Jerónimos Monastery underwent major restorations that concluded the central body of the annexe and restored the pews (fixed benches in the church).

By 1940 the “Exhibition of the Portuguese World” required the redevelopment of the space in front of the Monastery. The tombs of the poet Luís de Camões and the navigator Vasco da Gama were transferred from the Transept to the Lower Choir.

In the annexe to the Monastery, Lisbon’s Navy Museum was established in 1909, and Calouste Gulbenkian Planetarium was founded later, in 1962. 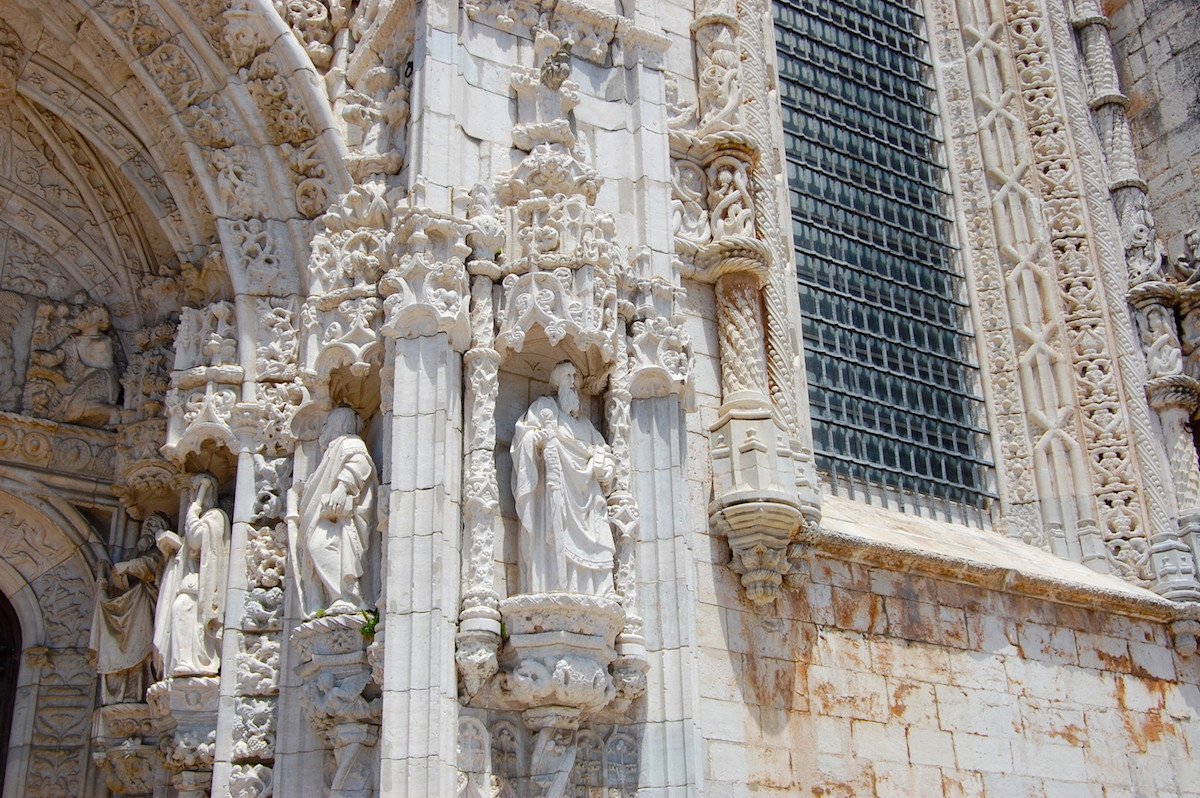 Despite being a side entrance, the South Portal is on the monastery façade opposite the River Tejo. The central statue over the portal is Our Lady of Belém with the Child, part of a total of forty statues depicting the prophets, the apostles, and other religious figures, including a few saints.

While smaller than the South Portal, the Main Portal facing east is also the door facing the High Altar. Above the portal, the statues represent scenes from the birth of Christ. On each side, there are statues of the monastery’s founding monarchs. 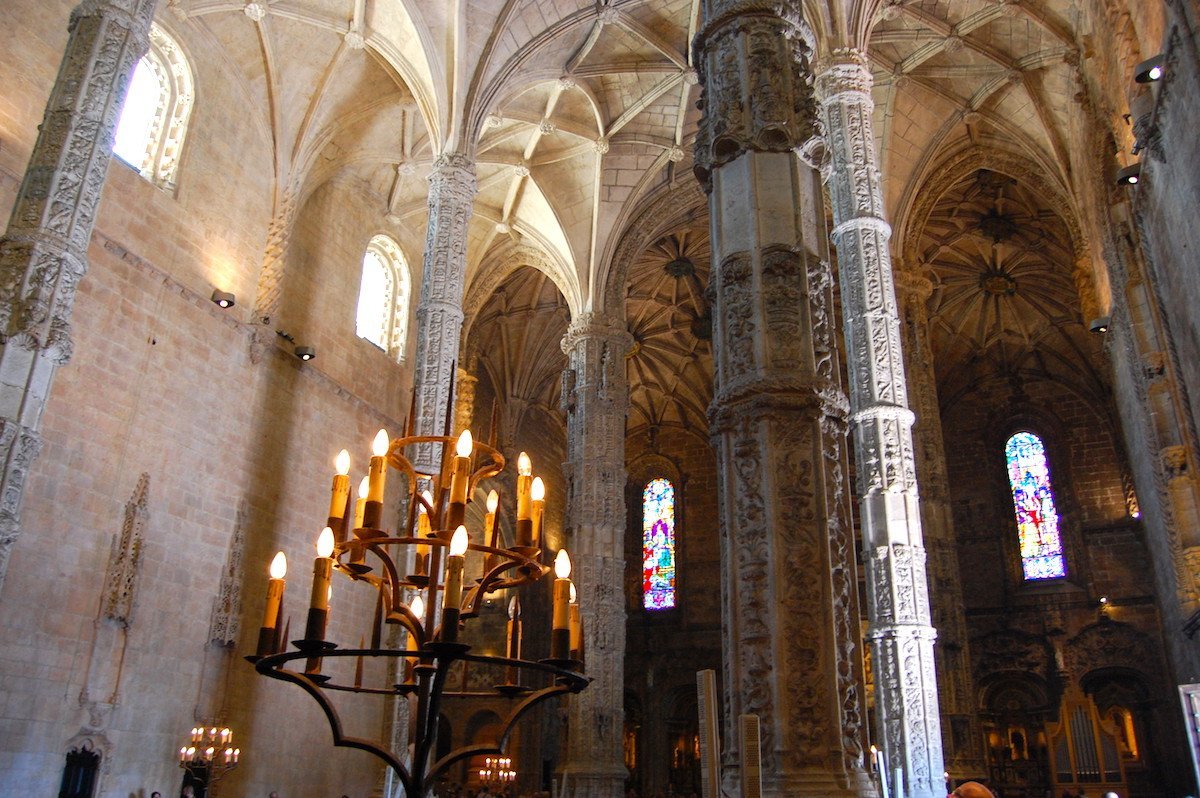 Entering the church (free) through the Main Portal, you will encounter the tombs of the navigator Vasco da Gama in the lower chancel, and opposite it the one of the Portuguese poet Luís de Camões. The large stained-glass windows cast a different light over the church.

With vaulted ceilings, the Manueline cloister reveals a unique decoration that combines religious and royal symbols (the armillary sphere and the cross of the Military) and naturalist elements (plant motifs and fantastic creatures).

Around the cloister, a number of spaces are also worth a visit, namely the Chapter Room, the Refectory, the Confessionals (where the monks of the Order of Saint Jerome heard the confessions of sailors and pilgrims) and the Library.