Rossio is literally the centre of Lisbon. Once you set foot on this iconic square to admire its fountains and architecture, it will soon become clear how much of the city is structured around it.

Rossio has played an important role in Lisbon’s history since the medieval times. The open area made it once ideal for marketplaces and fairs, military parades, political rallies, bullfighting, and even “autos-de-fé”, the public ritual of punishing heretics during the Portuguese Inquisition.

With the 1755 earthquake, several buildings were destroyed, and the square was converted into the rectangular shape plaza you see today, with a number of buildings occupied by hotels and cafés. 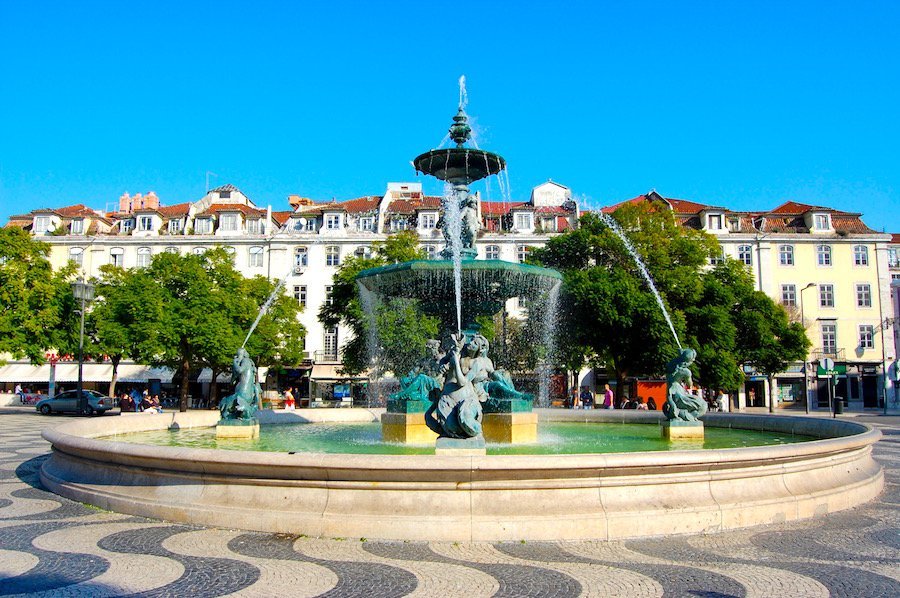 During the nineteenth century, cafés in Rossio were important meeting points for Lisbon’s intellectuals, mostly painters and writers. However, only the historic Café Nicola, linked to the nineteenth-century poet Bocage, remains today. It has outdoor seats perfect for people-watching.

While still part of Lisbon’s life – many locals cross the square daily on their way to Rua Augusta and the nearby streets – nowadays Rossio only occasionally witnesses political rallies and other public gatherings.

In the centre of Rossio stands the statue of King Dom Pedro IV on top of a column, after whom the square takes its official name. Two Baroque fountains can be found on either side. The Portuguese calçada (traditional pavement featuring mosaics of limestone and black basalt) dates back from the nineteenth century. The impressive building on the north side is the National Theatre.