Halfway up a long, steep hill heading to the castle, the Sé is Lisbon’s ancient cathedral.

It’s a large and impressive Romanesque structure dated from the foundation of Portugal in the 12th century. It was commissioned by Dom Afonso Henriques, the founder and first king to call himself “King of Portugal”.

The great rose window and twin towers form a simple facade. Inside, the Gothic cloister was built between the 13th and 14th centuries. Excavations under the cloister have revealed the remains of a 6th century Roman house and Moorish public buildings. The main chapel was modified in the 18th century to favour a Baroque style. 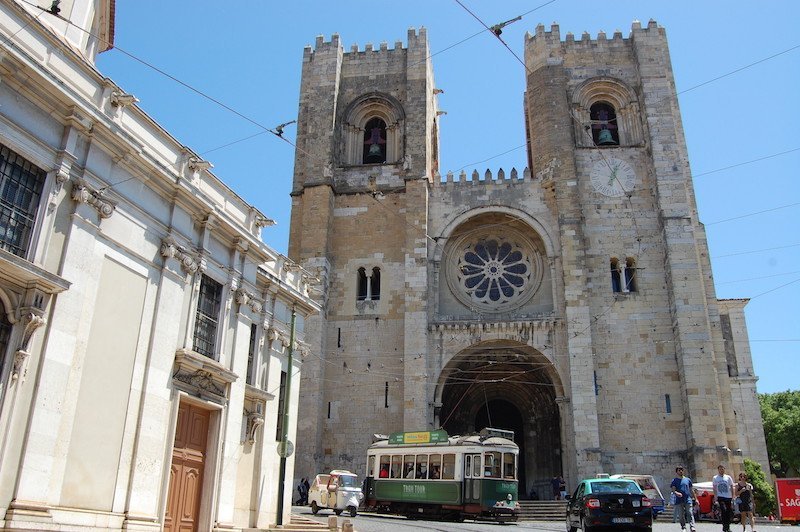 The Sé, Lisbon’s cathedral located on a busy junction

The Catholic church survived the 1755 earthquake. It lost its south tower; the cloister and main chapel, including royal tombs, were also destroyed. The church was restored quickly in the years that followed but not very carefully. In the first half of the 20th century, when the Sé was again restored there was a return to the original medieval style, removing most of the Rococo decor.

Entry to the Sé cathedral is free. However, you have to pay to visit the cloister tombs and the Baroque Treasury, which is a small museum of treasures, including antique silver, ecclesiastical costumes, manuscripts and relics of Saint Vincent.