Home » Things to Do » A Travel Guide for Visiting Porto

Porto in Northern Portugal is home to Port wine and a beautiful old centre which UNESCO recognised as a World Heritage Site.

Though smaller than Lisbon, the city has many sights to see, including Cais da Ribeira riverfront, Dom Luís bridge, São Bento railway station, and the port wine lodges on the opposite side of the Douro River.

Being Portugal’s second city means it’s usually easier to plan a trip from the capital, Lisbon. However, Porto Airport has flights to more than 50 European cities. And it doesn’t matter greatly if you start there or visit later in your Portugal holiday.

How to Get to Porto

If you’re in Lisbon, there are several ways to get to Porto by train, bus, plane, and car.

If you’re flying into Porto, the airport is located in Maia about 15 kilometres / 9 miles from the city centre. Take the metro (violet line), which has a station just outside the airport. You can reach central Porto in 30 minutes – 15 stops to Trindade station (one more to Bolhão).

To travel on metro, you need to buy an Andante card (similar to Viva Viagem for Lisbon) or the sightseeing Porto Card (with transport included). Check out what you need to know about Andante vs Porto Card.

Many sights, churches and museums are in the historic heart of the city, most of them within short walking distance from one another. To get to the Music House take the metro, and to reach Serralves Museum take the bus (routes 201, 203, 502 and 504).

What to See and Do The traditional rabelo boats once used to transport port wine

Here are some of the sights you might want to check out in Porto:

Ribeira: Part of the UNESCO World Heritage attractions in Porto, Ribeira is a riverside historic neighbourhood that retains all its medieval charm.

Torre dos Clérigos: Cleric’s Tower is an iconic building part of a complex that includes a church and a museum.

Sé do Porto: Porto’s Cathedral is an imposing structure that dominates the city.

Palácio da Bolsa: No longer working as a stock exchange, the 19th-century Neo-classical building has a sumptuous interior that fascinates visitors, especially the Arab Room, decorated in Moorish fashion and inspired by Granada’s Alhambra. Tours are offered in many languages.

Dom Luís Bridge: Traversing this bridge, dating from 1886, is a rite of passage in Porto. Cross it via the upper level on foot or by metro to visit the port wine lodges in Vila Nova de Gaia, and walk across the lower level back to the waterfront Ribeira.

Port Wine Lodges: Located in Vila Nova de Gaia, on the opposite side of the Douro River, Sandeman’s and Croft’s are two of the best well-known lodges. But all the 18th-century warehouses offer similar tours and tasting experiences.

Livraria Lello: Lello Bookshop has been voted one of the most beautiful bookshops in the world. And yes, it’s rumoured to have inspired Harry Potter’s author, J.K. Rowling. To visit inside, you need to buy a ticket, which entitles you to a discount of the amount paid if you purchase a book from the store. It can get crowded, especially on weekends, so try to visit on weekdays.

Serralves Park & Museum: The museum is worth a visit for the quality of the exhibitions in a beautiful 18-hectare (9-acre) park.

Casa da Música: The Music House is another of Porto’s impressive contemporary buildings. Take a tour or go to a concert to enjoy the excellent acoustics. In the rooftop restaurant, sample signature dishes at friendly prices, accompanied by views of the city.

While Lisbon has a Feast of Saint Anthony, Porto has its own celebration – Feast of Saint John, the patron saint of lovers. Which is better? Of course, Porto locals claim the night of 23 June teaches the capital a thing or two about having fun.

Offering your loved one a potted basil plant with a traditional poem is also part of Porto’s tradition. But different from Lisbon’s feast is Porto’s recent tradition (introduced in the 1960s) of hitting people with plastic hammers. Also, Lisbon doesn’t have a fireworks display, which in Porto happens at midnight above the port wine lodges on the opposite side of the Douro with thousand watching on Cais da Ribeira.

But the night isn’t over yet. Jumping bonfires takes place west on the beach, Praia dos Ingleses at the Douro estuary.

The afternoon of the following day, 24 June (a public holiday in Porto), witnesses the annual regatta of rabelo boats. These wooden boats were once used to transport port wine from the Douro valley to the lodges in Vila Nova de Gaia. Cais da Ribeira is the best place to watch as the boats reach the finish line in front of Sandeman’s. 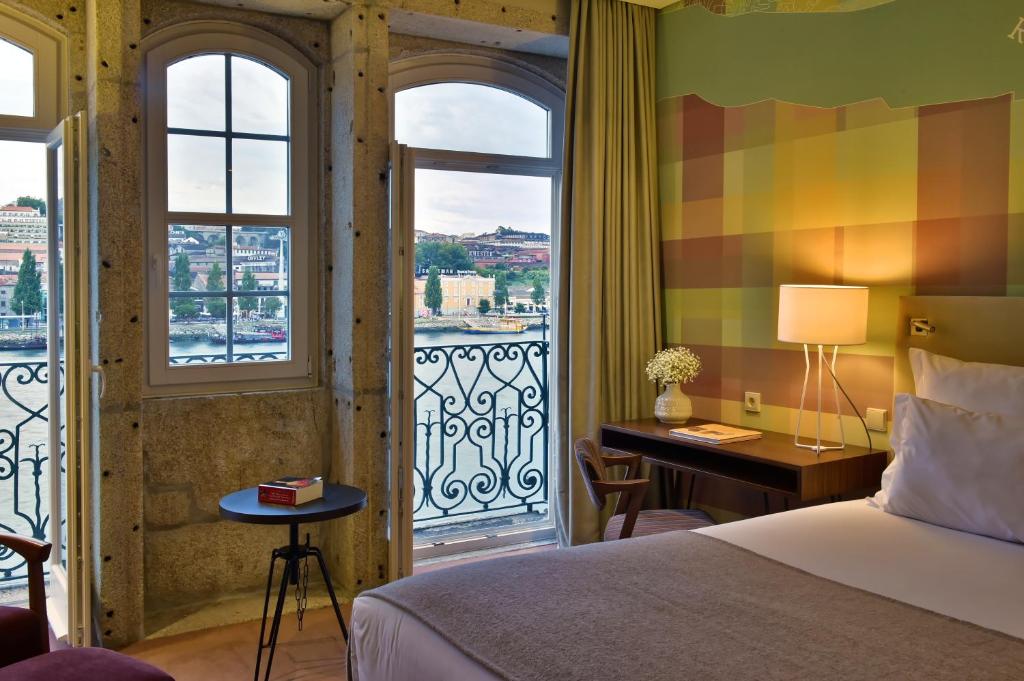 Porto offers plenty of accommodation, from cheap hostels to charming boutique and luxurious hotels. Here are some options to stay in the heart of the historic city:

Best for Luxury: Pestana Vintage Porto Hotel is a great 5-star hotel for a romantic stay, located in a 16th-century building in the heart of the historic city.

Best Boutique: Hotel Teatro has the perfect location both for sights and restaurants. Uniquely themed, this design hotel offers comfortable rooms and an exceptional breakfast included in the rate.

Best Value for Money: Ribeira Porto Hotel is a 3-star boutique hotel located in one of the most typical neighbourhoods in Porto with unique views of the Douro River and Dom Luís bridge.

Best Hostel: Gallery Hostel has beautiful, clean and comfortable rooms in a central yet quiet location. It has a bar, a kitchen, plus a terrace. Porto’s cuisine is essentially Portuguese – grilled fish, including sardines, cod, octopus, and several meat dishes. But there are some Porto specialties: francesinha (a kind of sandwich with bread, ham and beef, sometimes with an egg on top, covered with melted cheese and a warm, thick tomato and beer sauce, served with french fries), and tripas, a Porto-style tripe stew.

Casa Santiago serves one of the best francesinhas in Porto. Rua Passos Manuel 226

Restaurante Abadia do Porto serves authentic Porto cuisine in a central location. Besides the traditional tripas, it offers several cod and octopus dishes, roast lamb, and some delicious desserts.

Porto’s main shopping street is the pedestrianized Rua de Santa Catarina. Here, you’ll find everything from international department stores to family-run specialty shops to the historic Majestic Café with an Art Nouveau facade. Majestic will take you back to the Belle Époque, with a tea or coffee accompanied by a rabanada, a kind of French toast wrapped in a creamy egg custard with dried fruits, one of the house’s treats. There is a lot to see and do in Porto, but it is also worth taking a day trip to explore the Douro valley and wineries. Check out a self-guided tour which engages all your senses: Douro Valley Wine & Vineyard Tour.