Founded in 1906 as Colonial Garden, Lisbon’s Tropical Botanical Garden was transferred in 1912 to its current location in the Belém area, close to Jerónimos Monastery.

Specialized in tropical plants, the garden was designated a National Monument in 2007. It reopened after major renovations on 25 January 2020.

With an area of 7 hectares / 17.3 acres, the garden also shares space with the Presidential Palace and the Royal Riding School (or Picadeiro Real). It’s a great place to relax, get away from the crowds, and cool down during Lisbon’s hot summer months.

What to Do and See 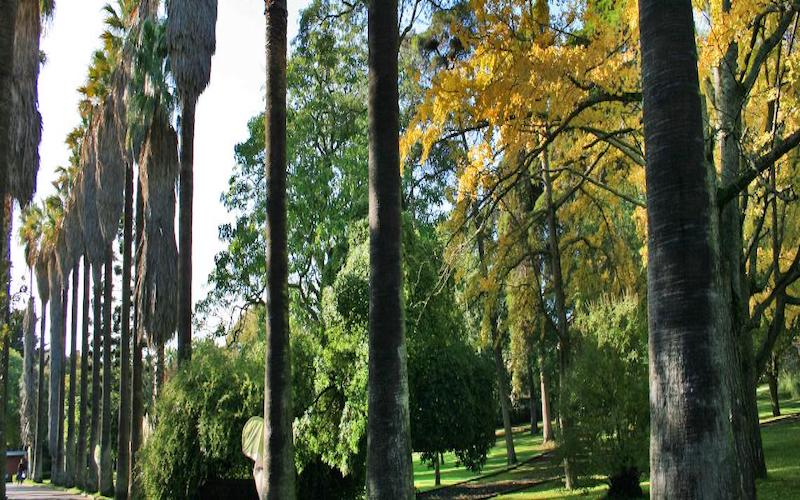 The Tropical Botanical Garden’s park and greenhouses feature about 600 types of plants, flowers, and trees from several continents. Mainly tropical and subtropical species, there are also a few plants from temperate regions.

If you have an interest in botany, keep an eye out for the following:

The garden was once a space of farms and properties owned by the Portuguese noble family between the 16th and 18th centuries.

Tucked away in one of the garden’s corner is the 17th century Casa do Fresco, also known as Casa do Veado (Deer House) in reference to the animal adorning its portal. More visible is a former palace, Palácio Calheta or Palácio do Páteo das Vacas from the same period, as well as a number of marble statues by Carrara de Bernardino Ludovici and Giuseppe Mazzuoli, among other 18th century sculptors.

The Main Greenhouse (Estufa Principal), built in iron in 1914, is from the same period as the Colonial Garden.

Other buildings go back to the Portuguese World Exhibition (1940), which celebrated 800 years of the foundation of Portugal. The former Casa Colonial, or Colonial House, (today Casa da Direção, or Board House) is decorated with colonial-themed azulejos (hand-painted tiles). The fourteen African and Asian busts by sculptor Manuel de Oliveira were also commissioned for the exhibition.

The Tropical Botanical Garden is a year-round attraction.

October through March – 9am to 5pm
April through September – 9am to 8pm
Closed on Christmas holidays and 1 January.

Read about How to Get from Central Lisbon to Belém.

The Tropical Botanical Garden is in close proximity to popular attractions such as Jerónimos Monastery and Belém Tower. Covering the main sights, this Belém walking itinerary will keep you busy for at least a morning or afternoon.