Time will tell if Jump e-bikes will be more popular than Uber’s ride-sharing cars. As it turns out, hopping on a bike might be faster than being stuck in gridlock.

Uber first deployed 750 of its Jump bikes in Lisbon on 28 February 2019. Then in May, it launched an improved version of Jump, and more than doubled its fleet to 1750 dockless e-bikes in the city.

You’ll be able to find and reserve a red bike using the Uber app. Unlike electric scooters, there’s no unlocking fee. In 1 October 2019, Jump prices climbed to €0.20 a minute from the previous €0.15. The change increases the cost of an hour ride to €12.

Uber is also testing two monthly subscription plans in Lisbon. For €24.90 a month, Electric plan includes 15-minute rides each day. Electric + plan costs €39.90 a month, with 30 minutes of use per day. Riding minutes in excess of plan will pay the normal price of €0.20 a minute.

Currently, Jump’s only competitor in Lisbon is Gira, the bike share system operated by the municipal company Emel that offers both conventional and electric bikes with fixed docking stations. 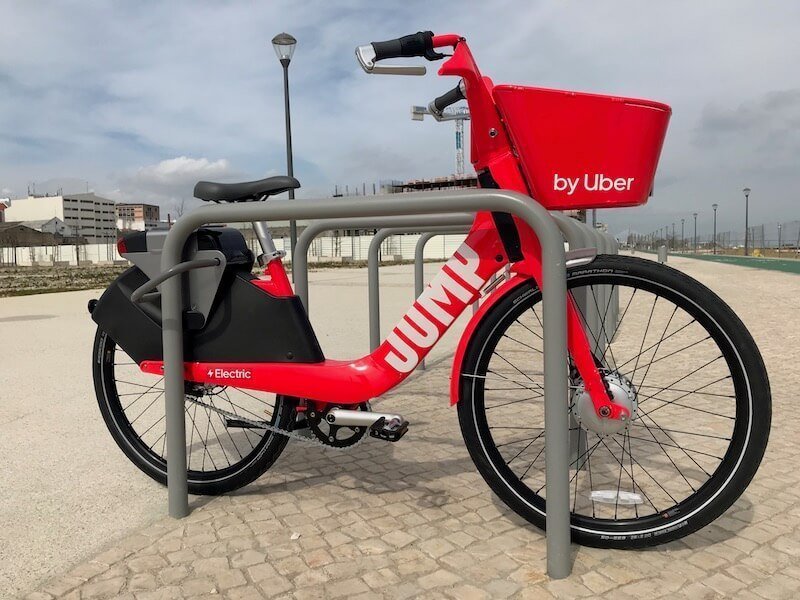 Red Jump bikes are different from green Gira bikes in a couple of important ways.

Uber’s Jump bikes are all electric and dockless. They can reach up to 25km/h or 15 mph, and ride for more than 30 kilometres or 19 miles on a full charge.

Because Uber’s bikes are dockless, riders can leave them on park bikes and throughout Lisbon, except on the historic neighbourhoods – Bairro Alto, Castelo, and Alfama – which are no parking zones (subject to a €25 fine).

For those willing to try out the red bikes, Uber is offering new users a free ride of up to €5. Just enter into the app the promo code JUMP27NC.