At midnight on New Year’s Eve, Lisbon skies blaze from several points in the city.

Fireworks herald the coming year for about 15 minutes. And, it’s free to watch.

Check out where you can see the spectacular display in an outdoor setting in Lisbon preceded and followed by musical entertainment. Expect the crowd to be in the thousands.

Lisbon New Year’s Eve Fireworks: When and Where 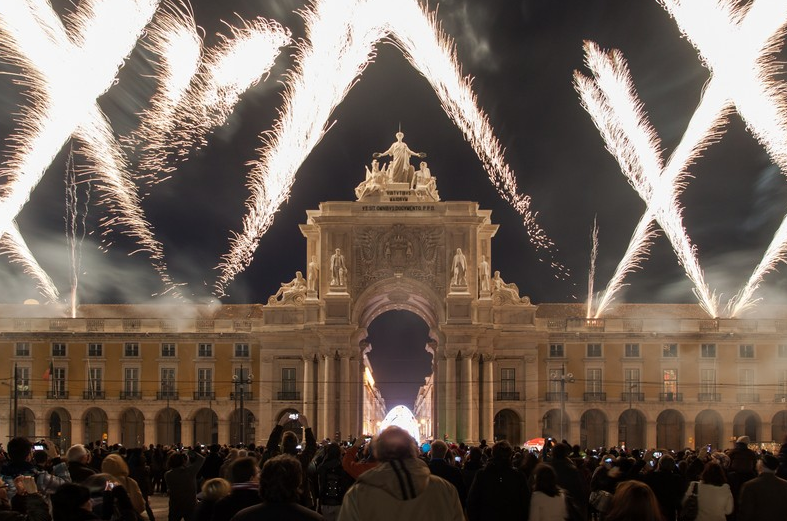 Fireworks in Terreiro do Paço (CML)

The crowd converges to Terreiro do Paço, also known as Praça do Comércio (see map below). The big event by the river is free, and gathers thousands.

It’s easy to get to the fireworks in Terreiro do Paço by metro. The closest station is the one named after the square on blue line, but on 31 December it closes earlier at 6.30pm. The nearby Cais do Sodré and Baixa-Chiado stations on green/blue lines are good alternatives, about 5/10 minutes walking distance from Terreiro do Paço.

As in past years, Lisbon metro runs all night on New Year’s Eve, on blue, green and red lines, stopping at main stations only.

Before and After the Fireworks

Local Portuguese bands usually take the stage in Terreiro do Paço at 10pm. It’s an annual tradition. The fireworks display starts at midnight, and lasts around 15 minutes. After the fireworks, there are Portuguese rock hits throughout the evening. Expect also a local DJ mix.

Other NYE Fireworks in Lisbon

Another midnight fireworks display usually happens in Parque das Nações, Lisbon’s riverfront futuristic neighbourhood. The celebration here is not so crowded, but several restaurants are open for business, and prepare special New Year’s Eve menus. Casino Lisboa also offers a free concert in its Arena Lounge on 31 December starting at 10pm. At midnight, come outside to watch the fireworks go off, and continue the celebration throughout the night.

Across the River Tejo is probably one of the best spots to watch Lisbon New Year’s Eve fireworks. Just take the ferry from Cais do Sodré to Cacilhas and celebrate next to Fragata D. Fernando II e Glória (a restored frigate). A live concert usually starts at 11pm. The fireworks set off at midnight from both sides of the river. There’s entertainment in Cacilhas until 2am. In past years, ferry boats ran between Lisbon and Cacilhas until 2am.

In Cascais, there’s usually DJ music and a colourful display of fireworks above the bay (if the weather permits) or above the pier. Trains between Lisbon and Cascais usually run until 4am on this special day.

Other Places to See the Fireworks in Lisbon

The fireworks are visible from across the city. You can get a great view of the fireworks from these Lisbon hotels. Some rooms provide an intimate view, but these will be the first to sell out on New Year’s Eve.

A cruise along the River Tejo can be another great way to bring in the new year. Enjoy an unforgettable New Year’s Eve Tejo cruise with an evening of dining and dancing. From the river, you will get the best views of the brightly lit city and of the fireworks at midnight.