Home » What's On » Where to Watch the World Cup in Lisbon

Looking for a place to watch the World Cup? Every four years, the event is an experience that millions enjoy across the globe.

If you’re lucky enough to be in Lisbon during the FIFA World Cup, you’ll need to know the best places with big screens to watch the matches among locals.

An all-Iberian derby kicks off the campaign of Group B. The match between Portugal and Spain on 15 June is likely to be very busy, as these are two of the world’s strongest teams. Then, Portugal will be paired with Morocco on 20 June and with Iran on 25 June. All eyes will of course be set on Cristiano Ronaldo.

Update: France and Croatia will face off in the World Cup final on Sunday, 15 July, at 4pm Lisbon time.

Whether it’s the Portuguese team in action, or your favourite team, below are some of the best places to watch the football games in Lisbon. 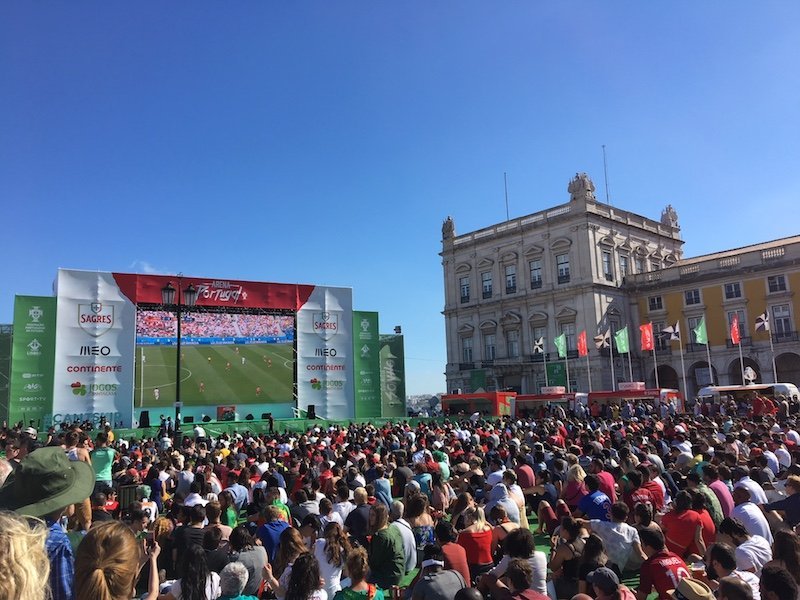 One thing you can be sure is that Terreiro do Paço (Praça do Comércio), one of Lisbon’s most important riverside squares, will be be packed with fans watching the matches on the big screen and supporting the Portuguese players.

The Arena Portugal set up in Terreiro do Paço will be screening all the World Cup matches, except two on 23 June, South Korea v Mexico and Germany v Sweden, due to a conflicting event, the Arraial Pride Lisboa 2018.

World Cup at a Pub / Bar in Central Lisbon

Every café, bar, pub and restaurant in Lisbon will be showing the World Cup matches, but there are some that happen to be sports mad. Here are a few suggestions:

Finally, Lisbon’s kiosks on Avenida da Liberdade and in Príncipe Real with their tables and chairs spread out across the esplanade will also be great places to watch the World Cup this summer.