Home » Traveller Information » How to Use Public Transport in Lisbon: The Complete Guide

One of the best ways to discover Lisbon is on foot. It’s s often more stimulating to walk from one attraction to the next than use public transport.

Still, most travellers will end up taking the metro, riding trams and climbing funiculars, if only for the fun of it, and probably getting the train to Sintra or Cascais, or the ferry to navigate Lisbon by water.

So, it’s useful to familiarise yourself with public transport options, so that when you visit the city you can get around with zero stress.

It’s fairly simple to use and generally safe. The one thing that some travellers find confusing is the Viva Viagem card. But once you get the hang of it, it’s surprisingly easy to use, and journeys are quite affordable.

Keep reading our complete guide to learn how to navigate the Portuguese capital’s transport system, including tips for riding and advice on tickets and how to top up your Viva Viagem card. We also include information on new forms of mobility available in the city, such as electric scooters, bikes, tuk tuks, and ridesharing services.

How to Ride Lisbon Metro 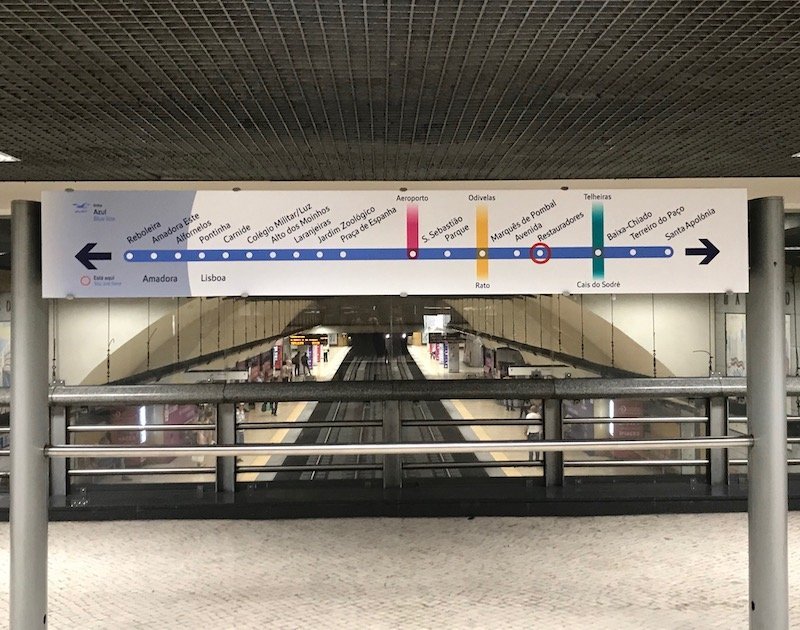 Lisbon metro is modern, has air conditioning, and is usually the fastest way to travel around the city. Some stations are equipped with an elevator to the train platforms.

The metro service runs from 6.30am to 1am every day.

The metro usually runs all night long with trains stopping in certain stations for a few events, such as the Feast of St Anthony and New Year’s Eve.

Only some Lisbon metro stations are accessible, equipped with an elevator to the train platforms. Check the metro map for stations marked with a wheelchair accessible sign.

Trains have priority seats for pregnant women, passengers travelling with small children, elderly passengers, and travellers with disabilities. So, don’t hesitate to ask for a seat if you need one, and remember to offer yours to travellers with difficulties.

How to Ride the Tram, Funicular and Lift

Pickpockets have been known to strike on crowded trams, in particular aboard trams 15 and 28. While riding, never drop your guard and always pay special attention to your belongings.

How to Ride the Bus 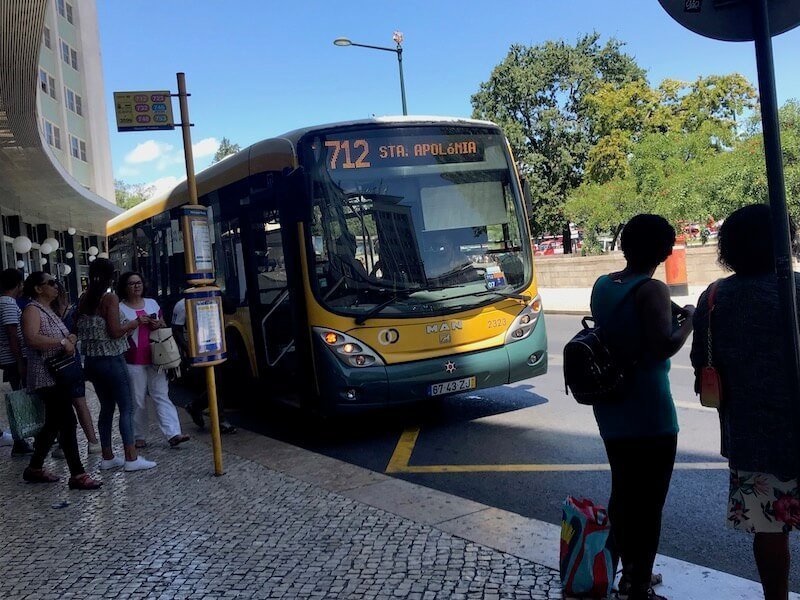 Bus stop in Marquês do Pombal

The bus can be more scenic than the metro. It also has air-conditioning and wifi. Additionally, it can get you to where the metro and trams don’t go.

Major lines run from 5am to 11pm at intervals of 15 to 30 minutes. There are night buses that run in the main city areas. 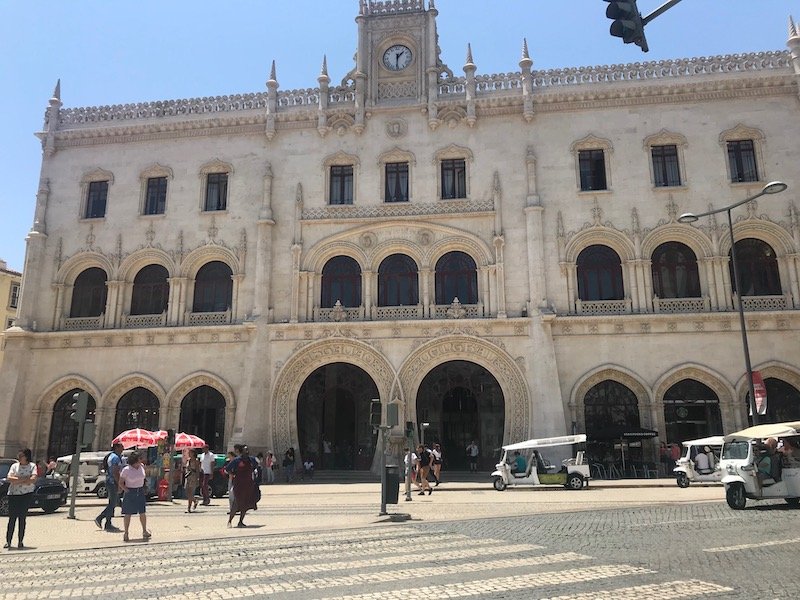 Operating hours vary according to the line but on average trains run between 6am and 1am.

As far as accessibility is concerned, visit CP’s page on Customers with Special Needs and Fertaugus’ page on Accessibility .

Riding the train during the day is usually safe.

How to Ride Lisbon’s Ferry System 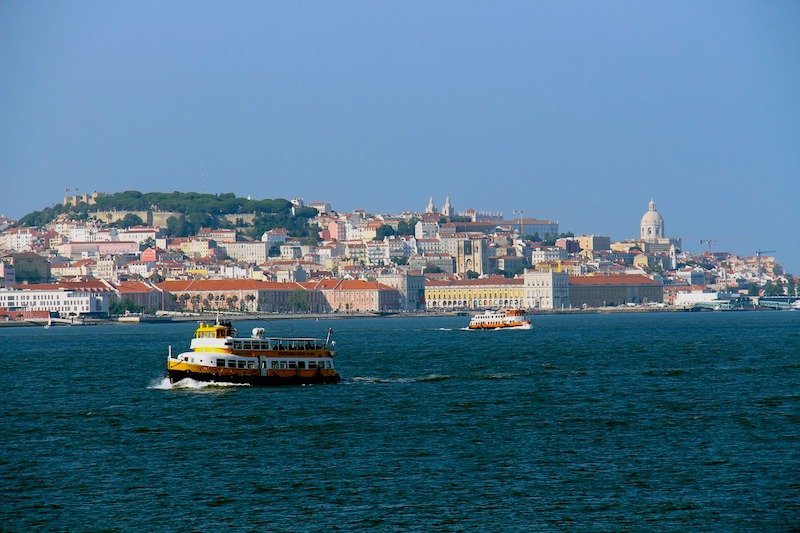 Ferries connecting Lisbon and the Tejo south bank are operated by Transtejo. Several connections per day are available from different riverfront terminals:

To ride public transport in Lisbon, you’ll need to buy a non-refundable Viva Viagem card, which costs €0.50. Do not confuse the Viva Viagem paper card for the occasional traveller with the Lisboa Viva plastic monthly pass used by locals.

You can buy and load your Viva Viagem card in any metro station from a ticket machine in cash (coins and notes) as well as debit and credit cards issued by major companies (e.g. Visa, MasterCard, Maestro). The Viva Viagem card is also available at selling points around the city and at commuter train stations from ticket machines.

Note that the Viva Viagem card can only hold one kind of ticket at any one time. So, depending on the length of your stay, how much you’re planning to use public transport, and whether you’re going to other places such as Sintra, Cascais, or the statue of Christ, you’ll need to choose between:

You cannot mix different kinds of tickets. So, if, for instance, you load your Viva Viagem card with two single tickets, you must first use them (you “empty” the card) before you can buy a one-day ticket.

With Zapping, because of the price of each individual ride, you’ll always have a few cents left on the card after riding. It’ll be difficult to empty your Viva Viagem card and load another kind of ticket after loading Zapping money. The best thing to do will be to get a new Viva Viagem card for €0.50 and load that one with the ticket you want.

Zapping money left on the card is non-refundable, although it can be transferred to another Viva Viagem card at a ticket office.

For the current tickets, fares and details on how to buy tickets and top up the card, see Viva Viagem Card: Use it on Metro, Bus, Tram, Ferry & Train.

Taking a Taxi in Lisbon 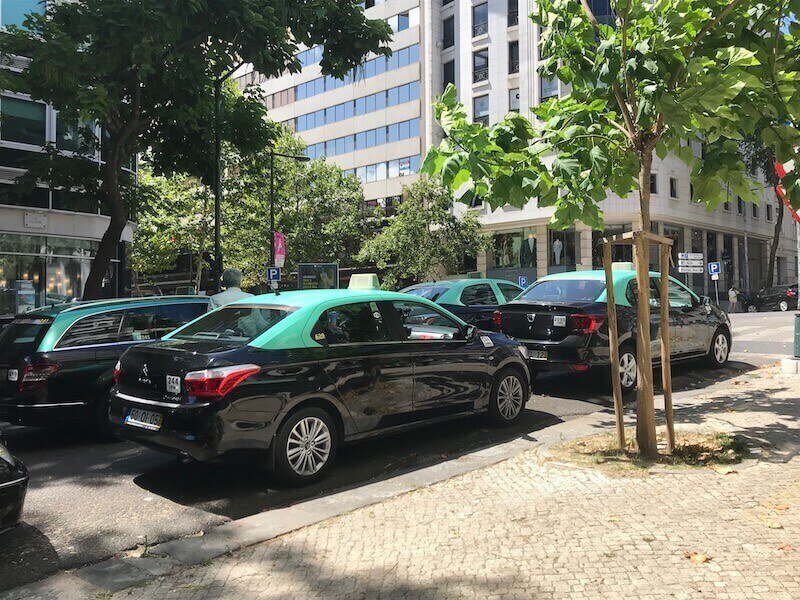 You won’t usually need to take a taxi in Lisbon, except perhaps to get from the airport to your hotel, if you have limited mobility, or if you’re returning late to your hotel after a night out.

Lisbon taxis are usually black and green. They are not expensive when compared to taxi fares in other European cities. However, depending on when and where you want to go, it may not be an option that will take you there faster (and it may not be that cheap).

The taximeter is displayed during the entire cab ride, and it includes the start fee (€3.25 from 6am to 9pm, €3.90 at night). A luggage fee of €1.60 may also apply. While many taxis accept cards, make sure to confirm before you get in.

Other Ways of Getting Around Lisbon 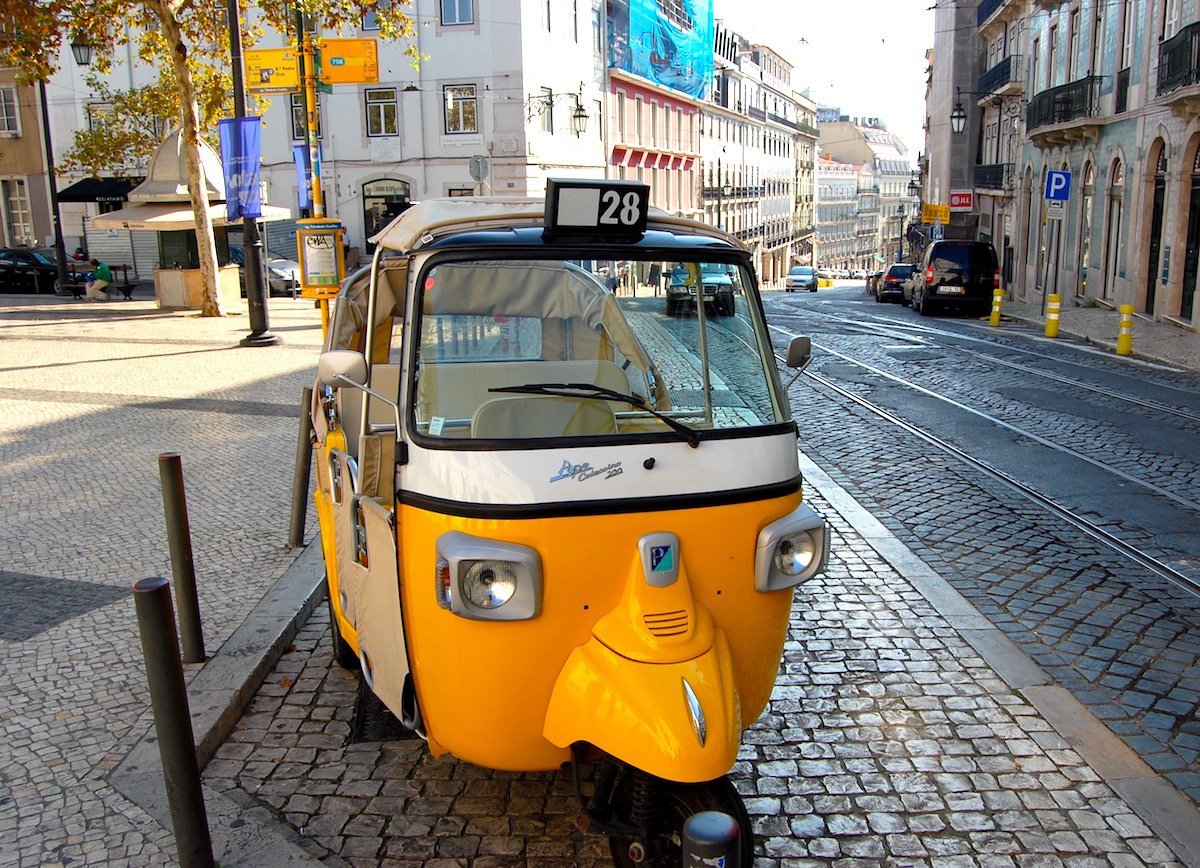 By electric scooter: Like many cities, Lisbon has now dockless electric scooters readily available all over the city. They are fun, fast, and tourists also use them to explore the best the city has to offer.

By bike: With a network of bicycle lanes opening up around the city, Lisbon has become a much more bike-friendly place. And with e-bikes now widely available, what better way to explore the city than by two wheels? See All About Bike Rentals in Lisbon to learn about your options.

By tuk tuk: It turns out that the tuk tuk be a very convenient means of transport for getting around the steep and narrow streets of Lisbon. Refer to Tuk Tuk Tour – The Fun Way to Explore Lisbon.

Hop-on hop-off tour: Hop-on/hop-off buses can be a good choice if you’re trying to get a broad sense of the available tourist attractions in the city. There are also hop-on, hop-off cruises and other boat tours in Lisbon.